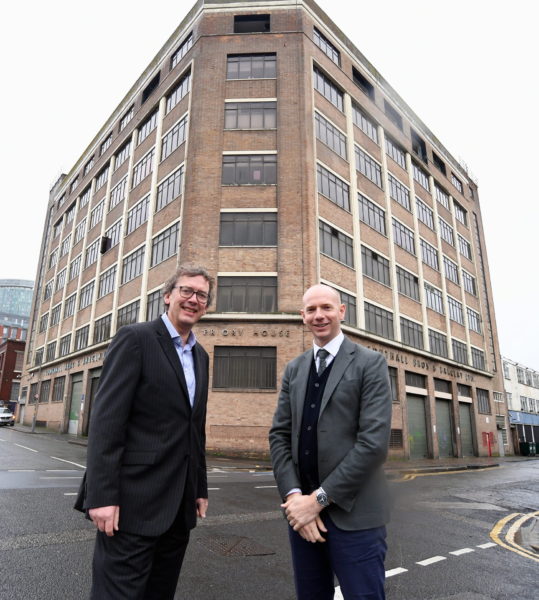 Pennycuick Collins has advised The Gooch Estate on the sale of Priory House. Rainier Developments bought the 77,000 sq ft building from The Gooch Estate and is set to apply for planning shortly.  Priory House is located on the corner of Kent Street and Gooch Street North – and the development plans will form a key part of the regeneration of Birmingham’s Southside district.

The seven-storey building, which was constructed in the 1950s, was home to the Forensic Science Service for more than 40 years before it closed in 2011. Rainier is planning to restore the building and create around 100 apartments for sale. The scheme will be the latest regeneration in the Southside of the city which is undergoing a massive makeover.

The area in and around the Hippodrome, Chinatown and the Gay Village is undergoing huge regeneration which will see it transformed into an attractive live-work-leisure destination.

“Priory House, vacant since the Forensic Science Service was disbanded in 2012, is an ideal building for a conversion to provide something unique to Southside and Rainier Developments’ exciting plans will see it not only restored but also brought back to economic vibrancy complementing the other developments in the area and being an important addition to the regeneration of the neighbourhood.”

Richard Mees, managing director of Rainier Developments, said the building was a landmark in a rapidly improving quarter of the city and would be a very positive component to the regeneration:

“Priory House is a landmark in the Southside district and we intend to not only fully restore while maintaining its 1950s character but also create some stunning apartments in what is a superbly located part of the city. There is a huge amount of regeneration across Southside which is making it a real destination for leisure and entertainment, but at the same time it is superbly located for apartment living being so close to the transport hub in the centre of the city. Now the purchase is complete we will be liaising with Birmingham City Council and also with other stakeholders and communities in Southside about how our development can bring a positive impact to the area.”